If sewing, dressmaking or hat making are your hobbies, chances are that you’ve done business with a haberdasher, whether you know it or not. If you enjoy making clothing, purses, hats, shoes or other accessories, you won’t get far without the items they provide. In fact, if those are your hobbies, you may be a haberdasher yourself and not yet be aware of the fact! But don’t worry. It’s an essential trade for all makers, adjustors, decorators and designers of clothing, no matter how fancy or how plain. In the UK, a haberdashery is a men’s’ clothing store, but elsewhere in the world, it refers to a provider of buttons, ribbons, zippers, buckles, snaps, needles, pins, measuring tapes, scissors, patches, elastics… well, you get the picture. In short, it’s a clothing crafter’s word for “miscellaneous”.

Nobody is quite sure where the word “haberdashery” comes from (though nearly everybody agrees that it’s rather fun to say). It appears in Chaucer’s famous “Canterbury Tales”, referring to a peddler who sold small, necessary items such as needles and buttons. This is about as civilized an origin as a word could have, but that’s not the only place it might have come from. Some people think that it could have come from the Anglo-Norman word “hapertas”, which meant “small wares”. Still others claim that it comes from the ancient Norse word “haprtask”, which meant “a peddler’s goods”. That means that even the Viking hordes couldn’t get by without haberdashers! Perhaps ancient Viking haberdashers carried spare helmet horns in addition to their other wares? 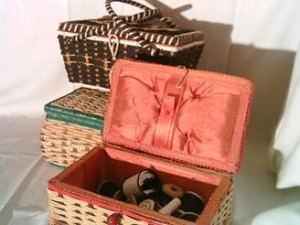 These days, you’re more likely to find lighter and less fearsome items at a haberdashery. It’s where you’d go to find notions for sewing… notions in the sense of “small items necessary for clothes-making”, though a haberdashery may also provide an avid crafter with “notions” of what their next project ought to be! Ask anyone who loves to sew and they’ll tell you that finding a set of really neat buttons or a spool of beautiful ribbon can be the inspiration for a garment designed to show off that absolutely perfect bit of trim. Unwary needlecraft enthusiasts may find themselves buying a great deal more than they intended when they wander into such a place!

And yet, despite the potential hazards associated with inspiration overload, a haberdashery isn’t a place you can avoid (and yes, haberdasheries can be websites as well, proving that the Internet really does have everything these days). They’re where you buy the tools of your trade. You can’t sew without needles, thread and scissors. You can get by without a pincushion, but why on earth would you want to? Actually, scratch that. Anyone who has had to cross a floor where pins have been spilled will argue that a pincushion is definitely not something you can do without. A haberdashery is also where you go to find the tools you need to take care of every dressmaker’s best friend: a sewing machine.

The other form of haberdashery, the clothing accessory store, is another friend to clothing makers the world over. Haberdasheries can sell scarves, hats, gloves, tie-tacks and other items that can complement a well-made garment. Some crafters are quite brilliant at making dresses, coats, shirts, and pants but prefer to leave the high-expertise work of making gloves to people who devote their craft to such things. Some people love nothing more than a perfect hat to complement a newly-made outfit, but don’t have the materials to create one. So they’ll visit a haberdasher’s shop to find those little details that take an outfit up that extra notch straight into perfection.

So you see, whether you’re a dressmaker, a hatter or just a fan of needlework in all its many forms, you’re going to visit a haberdashery at some point in your career. In fact, you may find that it’s your favorite place in the world to visit for everything from bare basics to fancy frills. Even if you’re just shopping for inspiration, the haberdasher’s shop is very likely to have exactly what you need. Here’s a hint, though. If you really want to make a Viking helmet, you’re better off going to a leatherworker’s supply shop for the horns.